If you have been keepng up with the blog you will know that my French class are having a cooking round robin that started with Eda cooking Turkish food.  You will also know that I was requested to make scones and I have been practicing finding a pretty reliable recipe.

What did I choose for my savoury dish that was suitably British? 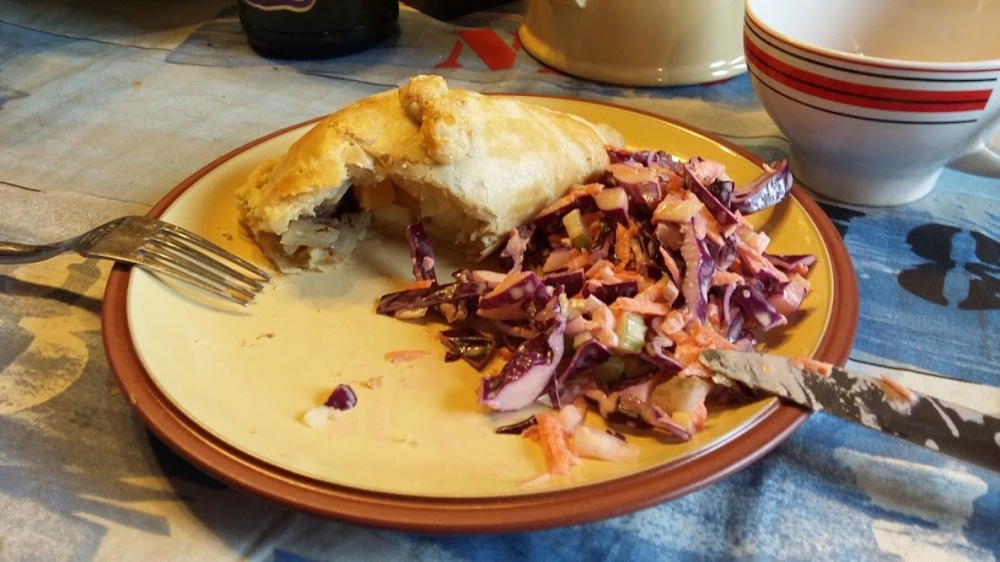 Cornish pasties are really tasty and have an interesting bit of history behind then.  They were also something that lent themselves to a more cub leader approach to the session –  a very hands on thing for everyone to get involved making.  Everyone made their own pasty.

I needed a really authentic recipe so where else to go but the Cornish Pasty Association – I couldn’t really go anywhere else could I?  The site gives a bit of history as well as the recipe I used.

Whilst pasties have been made for hundreds of years, they came into their own in the mines of Cornwall.  The miners had dirty hands down the mine with no means to wash them and you don’t want to be eating the dust from a tin or copper mine.  The famous crust or ‘crimp’ that is on the side rather than the top (which you see on Devonshire pasties) was the handle -the dirty crust would be discarded.  They stayed warm for a long time and were a really filling meal that miners needed to sustain them doing a really physical job.

The big thing I discovered was the use of strong bread flour to make the pastry is crucial for an authentic pasty.  This makes the pastry dough much more elastic and as a result makes the pasty the thing it was intended to be – very portable.  The pastry is much more durable for being carried around, keeping the filling inside and providing the ‘handle’ needed by the miners.  I have made pasties at home before using regular short crust pastry and generally it falls apart a little (and doesn’t really taste like a proper Cornish Pasty however lovely they are).

But – a warning – the pastry does need to be made the night before you make the pasties as the pastry is impossible to roll out without leaving it overnight.  Also, allow it to return to room temperature if you have put it in the fridge before you roll it out.  This seems a bit labour intensive, there was a general feeling that grabbing some ready made pastry would be just fine.  Until we ate the pasties that is!!  Everyone was agreed that it was so worth making the proper pastry.

The actual recipe is via the link above but as ever, we didn’t make it quite as listed.  So here is the recipe as made in Maisons-Laffitte:

I rubbed in 200g of butter into 500g Strong bread flour.   Once the flour and butter looked like fine breadcrumbs I added 175mls of cold water and mixed to get a dough.  After a bit of kneading you can feel the extra elasticity of the dough compared to regular pastry dough that it gets from the extra gluten from the strong flout.  I then wrapped the dough in cling film and put it in the fridge overnight.  In the morning I took the dough out of the fridge so that it was room temperature when everyone arrived.

Now for the filling:

3 small waxy potatoes, 1 navet d’or (I couldn’t find swede so this little yellow turnip was a perfect substitute) and 1 yellow onion were all diced.  This base combination is at the heart of the pasty.

Cornish pasties would traditionally use beef skirt as it is a lean cut that will cook in the same time as the vegetables.  I couldn’t quite figure out what I should ask for here in France.  In my best French, I went to the market and explained that I was going to fill pastry with raw chopped beef with raw chopped vegetables and the boucher gave me 500g of boeuf – the French term for the cut he gave me has been forgotten already.  This was way more than we needed and was expertly chopped by Mila into small cubes.

For a vegetarian pasty then leave of the meat or substitute it with cheese (an extra mature cheddar would be perfect) or some tasty mushrooms would work a treat.

The pastry was rolled out quite thinly and then 6 circles were cut out using a 20cm plate (side plate) as a template.  Then the fun started.  Everyone was given a circle to fill with the vegetables and boeuf with plenty freshly ground black pepper.  Time to wet the edge of the circle with water, fold it over and attempt to crimp the edge.  Due to the elasticity of the dough it is quite amazing how much can be squeezed in.  Standard shortcrust pastry would have split, especially trying to crimp the edge.

Mila won hands down – seems that crimping an Argentinian empanada is not much different to crimping a pasty.  So in looks, Mila’s was far the best pasty!  After glazing with beaten egg they were ready to go in the oven at 165C for 50-55 minutes. Plenty of time to prepare coleslaw. 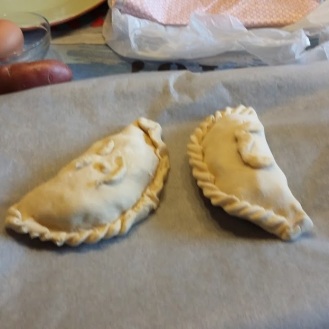 Mila’s expert crimping on the right! 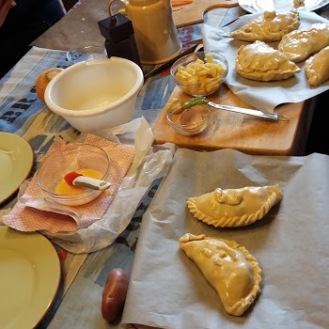 The finished pasties on the work table

Three of the cooked pasties

Whilst coleslaw does not originate in England – it seems to have Dutch origins with the word being from the Dutch ‘koolsla’ which quite literally means cabbage salad – it is a salad that has been adopted into British cuisine.  In Britain a coleslaw will have carrot and onion mixed with the cabbage and generally covered in a mayonnaise based dressing.  Most shop bought coleslaws are really heavy on the mayonnaise and the onion, homemade coleslaw is an altogether different thing – a much bigger proportion crunchy fresh vegetables in the proportions you want and lighter on the mayo.  I plumped for trusted BBC Good Food for a recipe but of course didn’t follow it completely.

We finely sliced ¼ of a large red cabbage, ½ white onion (milder than a yellow onion generally), grated 2 carrots and 2 sticks of celery into a oversized bowl – it helps to have extra space to toss the ingredients in the dressing without it all escaping all over the table.  I think the red cabbage really makes it a beautiful dish and we do eat with our eyes as much as our mouths.

The dressing was a couple of extremely generous dollops of mayonnaise, the juice of ¼ of a lemon, teaspoon of dijon mustard and  a generous dash of herbed white wine vinegar all whisked together then poured over the vegetables.  It takes a bit of stirring to really coat the vegetables in the dressing.  The dressing took a little colour from the red cabbage turning it ever so slightly pink.

An optional addition to this salad would be some walnuts or raisins.  And of course wholegrain mustard or none at all, a different vinegar – all very much dependent on what you have lurking in the cupboard.

The recipe is all there in the last post and I am pleased to report that the recipe has repeatable results.  Even with an audience – that is a true test.  Will the scones rise and look all scrumptious with all those eyes on you, all that anticipation particularly from the person who loved good British scones so much that they requested you to make them!!

I found some perfect cream at the market – a very similar consistency to clotted cream without the yellow crust that is the ‘clotted’ of clotted cream.  Cream along with top quality Bon Maman jam on warm, just out the oven scones, there wasn’t much left despite everyone having devoured a good sized pasty and double helpings of coleslaw!  But who can resist a warm scone?

I have rediscovered the wonderful art of making scones – made, baked and cleared away in about half and hour with things that are fairly standard in the kitchen.  And are pretty virtuous so long as you can be restrained with the butter, cream and jam (if that is possible?) 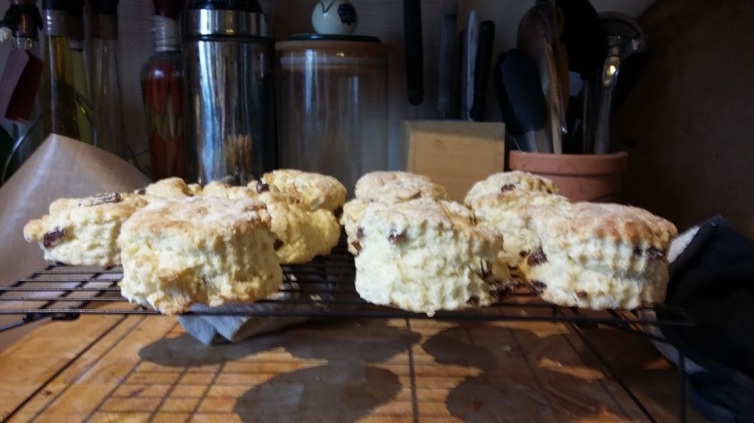 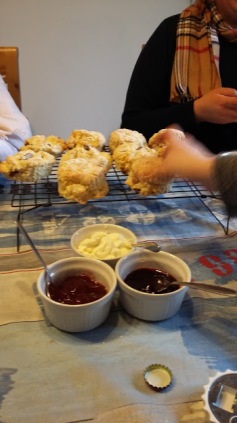 Thank you to the lovely ladies who stayed all day and were wonderful company.  So glad that you enjoyed the food and now you can make it all at home!  Next time we will be heading to Argentina – I am so looking forward to another day of cooking and finding out what Mila is going to get us cooking.