If there is one thing I love about the cold weather is pulling out the biggest pot I have and throwing together a large quantity of soup.  There is nothing quite so comforting as a big bowl of soup on a cold day with a nice big chunk of crusty bread and maybe a bit of strong cheddar grated on top or a blob of creme fraiche…..already dreaming of the next pot even though the remains of the last pot are sitting in the fridge waiting to be reheated.  Soup is nearly always better the next day!

My kids used to take a bit of convincing to have soup and would end up having a meal that was more bread and cheese than soup but there has been a breakthrough this soup season.  They are actually asking for soup and wolfing down big bowlfuls, even asking for seconds!!  They still prefer me to get out the handheld blender and whizz it smooth.  I miss a good chunky soup with pearl barley thickening the broth and the mystery of what lump of veg you will get in the next mouthful.  Luckily, I also love a velvety smooth, pureed soup.

The exception to my kids ‘smooth is best’ rule is noodle soup.  Thanks to Kung Fu Panda there is a real love for noodle soup complete with chunks or strips of vegetables (so long as I grate the courgette!!).  So, at the request of the younger son, tonight it was noodle soup with a bit of a treat of some chicken in there (veggie Daddy is off to Madrid tonight so time for a little meat!).

We visited a boucherie on the high street this afternoon.  Son the younger is a lover of the dark meat so he wanted chicken thigh but we didn’t know the word, mime saved the day.  Cuisse is thigh, now you know if you didn’t already!  Despite this lack of boucherie  vocab, my French is getting better.  I asked the butcher to remove the bone and skin – no neatly boned thighs in sealed packets like you find in the supermarket in the boucherie.  He quickly prepared the thighs there and then, offering me the bones for the stock.  Even though the shop is only small, the butcher gives you a little piece of paper with the price that you take to the till, mere steps away, to pay a lady and then I left with my little parcel.

So we made chicken noodle soup together.  It was a random soup – both sons were helping and I was letting them create.  So here goes our recipe – Make it up as you go along Chicken Noodle Soup!

It started with an onion, sliced as thinly as an 8 year old can manage until the eyes are watering too much and then it was Mum’s job.  We sauteed the onion until it started to brown.  I chopped the chicken, coated it in flour and then threw it in the pan.  There was a surprising amount of chicken from 2 chicken thighs.  We added about a 1½ litre of water, a stock cube, a teaspoon of Chinese 5 Spice and then, the Magic ingredient.  To a child star anise is quite a thing.  It smells so nice and is star shaped – how exciting is that?  Son the younger loves this magic ingredient so 4 stars were thrown into the pot.

I sent the boys to the fridge to choose what other veg to go in the pot.  This was their selection:

This was left to simmer until the chicken was cooked and then 2 blocks of egg noodles were thrown in to cook in the broth.  A sprinkling of frozen basil was added at the end and then ladled into deep bowls to be eaten or rather slurped and splattered with chopsticks.  Although spoons were on the table, the broth was drunk straight from the bowl! 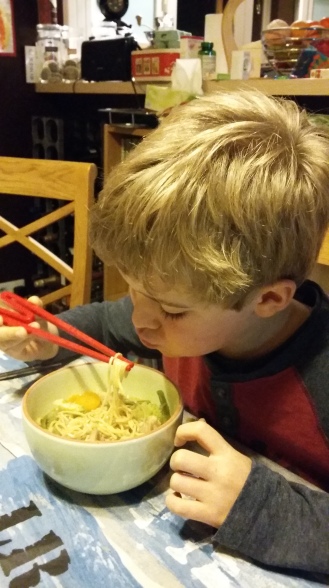 Dinner was a nearly 3 hours from the start of cooking until the last of the second helpings were slurped out of the bowl.  It is nice to have time to do that – let the kids be masters in the kitchen, let them experiment and feel like it is their dish.  A gentle guiding hand so there is no great disaster but in their eyes it was their soup.  And they enjoyed it all the more because they cooked it.